Points To Check When Considering Solar

Move to clean green energy, switch to solar, and reduce the carbon footprint! Shrink your utility bills, and power your home with a renewable source of energy. But before switching to solar, you have to figure out some of the things that will help you estimate your savings potential through solar energy generation.

The key points are:

Before going with solar PV installation at your property, it is very essential to be aware and understand your household’s average daily consumption. There are different solar-powered house requirements based on the number of family members and the number of appliances connected to the power system. The study of your energy bill is very important as this will provide consumed energy units in kilo-watts (kWh) for a certain period of time (either quarterly or monthly). It is also important to know the peak time when you use most of the electricity. Target solar can help you in assisting to study your energy bill and selecting the right size of the solar system for your home. More information about the right size of a solar power system for your home can be viewed here.

B. How much power does a solar system generate?

Solar generation depends on several factors such as location, type of the rood and orientation, panel orientation, seasonal and daily weather, and lastly your system size. For this reason, we use averages for making it simple and CEC guidelines.

The CEC advises that in Queensland and New South Wales an average 6.6 kW solar system generates approximately 26.4 kWh energy on average daily. The average daily sun exposure taken into account is 4 hours, thus a simple way to estimate the output of a solar system is to multiply the system size by 4. On any given day, this figure can be extremely different, for example, during harsh weather conditions such as rainy /cloudy days. On the other hand, in Melbourne, an average of 24.4 kWh of energy is generated per day for a 6.6 kW solar system, because of less sun exposure in Victoria.

As an example, a 3kW system will generate approximately 12kWh of power per day. This may differ during summer and winter, which works well in Queensland and New South Wales households and businesses due to hot summer days. Here is the average daily output figure for a 6.6 kW solar system in Queensland. 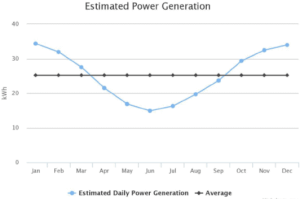 It is very vital when selecting the best solar panels when installing your solar power system. The decision you make on your solar purchase is crucial because it is the best investment decision you make. There are several factors other than cost when making product selection (panels and inverter) such as:

The final cost of installing a residential solar PV system depends on the products, the size of the system, and the product brand you use, for a residential 6.6 kW system it ranges between $4,500 and $7,000. The simplest payment method is paying in cash, however, if you don’t have this huge amount in cash. It is advised to go for solar loans. The solar loans are similar to any other loans, with you paying small down payments initially followed by covering the remainder through a monthly payment. Target solar provides lots of financing options. For more information, click here.

Other financing options are for commercial clients. The actual cost of a commercial Solar PV system highly depends on the system size and products. If you are running short of funds or do not want to buy the system straightway, you can enter into to solar power purchase agreement (PPA) or lease the solar system. PPA allows you to buy discounted energy from the company that installs and maintains the solar power system. On the other hand, in the lease option, you own the system instead you pay small rental payments. For more information, click here.

In order to counter fossil fuel power generation, RECs act as a financial tool making it more cost-friendly as compared to the former. It helps electricity generators and retailers to meet their target requirements under the RET policy by boosting the amount of renewable energy produced. Renewable Energy Certificates (RECs) are divided into two categories: Small Scale Technology Certificates (STCs), which apply to domestic and commercial solar PV power systems under 100 kW and Large Scale Generation Certificates (LGCs), industries or solar farms having a solar PV power system above 100 kW are applicable for LGCs. For more information, click here.

There are other South Australia battery schemes and Solar Victorian solar home programs which are available for homeowners in South Australia and Victoria. Rebates can considerably reduce the final system cost, it is recommended to research the state rebate options and federal options beforehand to have a better option on the savings. For more information, click here.

These are the few important factors that are to be considered when you research about purchasing a solar power system. It is recommended to run through this checklist develop some familiarity and understanding of solar product and financing selection. It is always recommended to research solar companies and request pricing estimates to determine a solar system size that fits well for your home, making you one step closer to sustainable living and savings in energy bills.