Is it worth living off-grid? Discover it with Target solar experts!

Target Solar has more than 25 years of combined experience and uses consultants from various fields such as engineering, architecture, business and finance, renewable energy, and the law. We hold an electrical contractor`s license required to be eligible to perform solar-related electrical work across Australia. Furthermore, Target Solar only uses CEC accredited solar installers and electricians to perform solar installations and conduct any electrical works.

We work directly with leading manufacturers and our projects range from residential solar installation to large-scale commercial solar power stations. If you´re living in a remote area where the supply of electricity can be either irregular or is terribly costly, an off-grid solar power system from Target Solar will allow you to completely be independent of the grid and help you satisfy your energy requirements. Designing and installing an off-grid solar system requires a high level of experience and skills to understand customer`s requirements. Target Solar customizes each project uniquely as per the customer`s needs and guarantees that each system will work efficiently.

Here are the advantages of choosing an off-grid solar power system:-

What is an off-grid solar system?

Well, when we talk about off-grid solar it means functioning electrically without any connection of the mainline power supply. So the next question that arises is how do the electrical requirements of the people are satisfied going off-grid?. So, here lies the answer. The Off-grid systems, popularly known as stand-alone systems permit electricity to be harnessed by solar power and stored inside the battery. It is designed to electrify remote areas where electricity is either unreliable or expensive. Generally, an off-grid solar system or stand-alone photovoltaic system consists of the solar panel either on the ground or roof, solar charging modules, a storage battery bank to store surplus energy, a backup diesel generator which is integrated with the solar power system, and an inverter which acts as a bridge between different parts of the off-grid solar system and manages inputs of energy between them. Usually, the off-grid system batteries are used for energy storage as they may account for up to 40% of the overall stand-alone PV system cost over its lifetime.

We make a difference
Compare to other off-grid solar systems, Target Solar`s modern off-grid solar systems are easy to maintain and come with the latest technology, which is fully automated and can be monitored and controlled using a Wi-Fi device. Moreover, electricity produced using an off-grid solar system is much richer in terms of quality as compared to electricity coming to your facility through a power grid. It is simply because you´re utilizing whatever energy you are generating without any third-party interference. Furthermore, using good power quality can further enhance the lifespan of your electrical appliances. 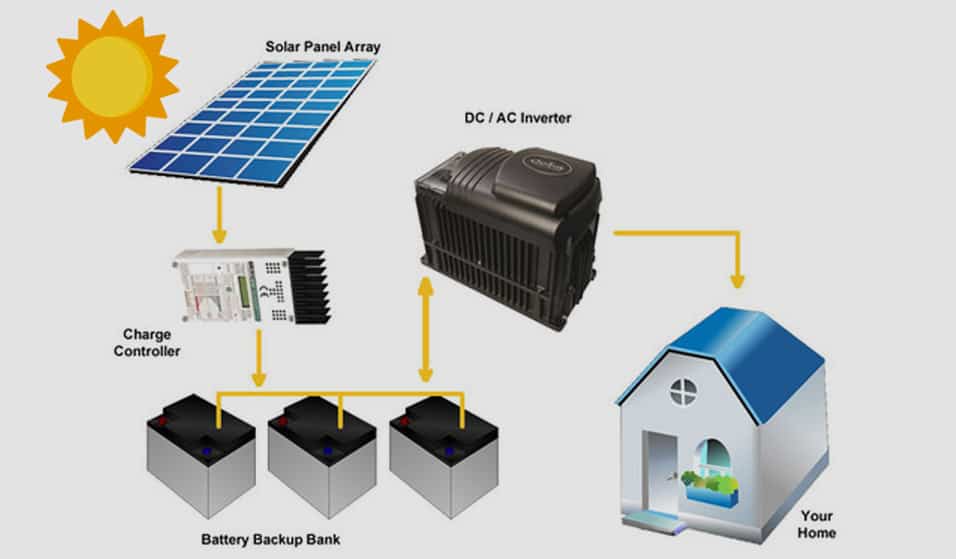 An off-grid system can be connected in difference ways and you may not know the difference between AC and DC coupled off-grid systems. In DC coupled system, the energy flows from the solar panels through the MPPT and gets stored directly into the battery bank. An AC inverter is connected to battery, which converts the DC power to AC from the battery bank during blackouts. Conversely, in AC coupled system an AC inverter is installed which converts the DC into usable AC power, like in a standard grid-connected system. This energy is fed directly to the loads in the facility without having to go to the battery. An additional charging inverter is added for charging and discharging the batteries, this bi-directional charging inverter manages the entire off-grid solar system. Depending on the generator requirement the off-grid can system can also be made automated. For more information, click here.

How is off-grid solar system managed by Target Solar?

For large off-grid or stand-alone solar PV projects, a dedicated project manager is assigned to run the whole project and manage activities such as site inspection, designing, network approval, procurement, installation and testing and commissioning. The practical completion date of each project is dedicated based on the system size and requirements. For large project one of our in-house engineer is allocated to inspect the site followed by the designing of your project.